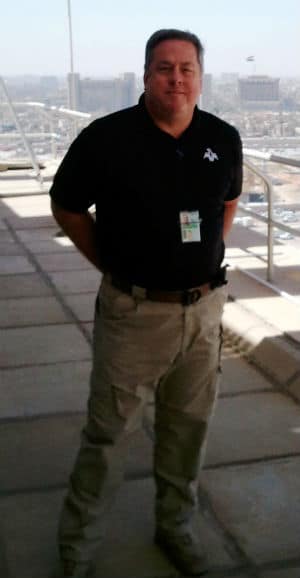 It’s been nearly a decade since Patrick O’Burke officially retired, but it turns out the former Texas Department of Public Safety criminal law enforcement commander was just getting started.

O’Burke, who is enrolled in the Lamar University online Master of Science in Criminal Justice program and is on pace to graduate in spring 2018, has considerably more on his plate than most people.

“My wife [Hilda] has been a little crazy about my going back to college,” he said. “She thinks I should get a Ph.D. I say, ‘I don’t think so.’ Surprisingly, most people have been very interested in my going back — particularly since I’m getting older. I’ll be 60 this year and I’ve really enjoyed going. It has been very challenging and useful to me so I don’t sit in a rocking chair and watch TV all day.”

There’s not much chance of that happening. In addition to school, O’Burke is the private investigations company manager for Excalibur Consulting and school director of the Polygraph Institute in San Antonio. In other words, his retirement lasted about a nanosecond.

“I decided I was not going to sit around the house,’” he said. “I wound up going to Iraq working with military intelligence and Iraqi intelligence for security screening, trying to keep bad people from infiltrating the groups that were there during the war, from 2010 to 2011. I got to do some really cool stuff over there. I came back and decided I was going to keep doing stuff because it keeps me busy and I enjoy the work.”

O’Burke grew up in the Beaumont area and graduated from Lamar University with a Bachelor of Science in Criminal Justice in 1982. His father also attended trade school at the Lamar Institute of Technology (LIT), which was once part of Lamar University, and his siblings all hold degrees from LU.

“Online was the only feasible way for me to really go back to school,” he said. “I did a lot of research and found that Lamar was one of the more affordable programs that offered what I needed, so I felt comfortable with it and took the plunge. When I did a comparative look, Lamar was attractive in cost, curriculum and availability. It was a quantitative decision, not just an emotional one.”

So far, the online format has exceeded O’Burke’s expectations.

“I’m taking a lot of classes that go very fast, but I at least have some flexibility to move stuff around a little bit,” he said. “It’s worked real well. I didn’t really know what to expect. When I went to college, it was all in the classroom. Of course, I’d never heard of online.

“Sometimes you hear about negative connotations with online, but this has certainly been one of those things I’ve been able to sink my teeth into. It’s actually more consuming because you can turn it on any time and be engaged.”

O’Burke is currently enrolled in his fifth course in the program. He has developed somewhat of a routine when it comes to school work.

“It depends on whether or not I have a polygraph school going on,” he said. “If I’m going to do some class work early in the morning, then I get up and do that. If not, then I get up and teach and do some class work late in the evening. The flexibility is really a key point. As an undergraduate, you had to get up and go to that class, whereas online if you have to work or to push something back, you can rearrange things in such a way that you can really fit online studies into your schedule in an accommodating way that allows you to really participate.”

Laying Down the Law O’Burke had one condition when he made his return to higher education.

“I made a promise to myself that I was going to get great grades, as opposed to my undergraduate when I was marginally lazy on some level,” he said. “I’ve got straight A’s going. I’m very happy and I’m learning stuff, so I’m enjoying it.”

With the online Master of Science in Criminal Justice, O’Burke is specializing in criminology because he teaches interview and interrogation.

“I debated in my forties about getting a master’s, and I couldn’t make up my mind to do it,” he said. “It’s really become important to me and my career at this point, so I decided I’d take the plunge. I kick myself now for not having gone 20 years ago.”

Through his jobs, he was already familiar with several criminal justice programs throughout the country.

“Some of what I was looking for is somewhat odd because of the uniqueness of interview and interrogation,” O’Burke said. “I felt some flexibility at Lamar to keep it structured the way that it would flow for me. I looked at psychology, but a lot of psychology people are really averse to any discussion about interrogation — they just don’t like the feel of that. Unfortunately, that’s what investigators do.”

He has found value in all courses in the curriculum to this point.

“We’ve had some really good classes,” O’Burke said. “Some of the police management classes can be kind of repetitive because I’ve been a manager in a large police agency, and I have no real desire to supervise again in my life. But, the management classes have been very instructional and relevant to me. They’ve incorporated well in my education even when it wasn’t specifically what I was after.”

While O’Burke has liked all of his classes, one course in particular stands out as a favorite — CRIJ 5324: Serial Murder.

“That course has been extremely interesting because I’ve done a lot of murder investigations,” O’Burke said. “I’ve interrogated a lot of murderers. I could relate that course to my on-the-job experience really well. I drew a ton of information out of that course. There have also been several classes on intelligence including Geographic Terrorism and National Security Intelligence that I really enjoyed. I’ve been overseas and worked in some strange places. Those classes on intelligence and terrorism were very interesting and relevant to what I have experienced overseas. The professors in my classes have brought real job experience to the instruction that I could appreciate.”

O’Burke was wrapping up the bachelor’s degree program when he decided he wanted to be a police officer instead of becoming a lawyer.

“I took a job at the local sheriff’s office,” he said. “I actually took the Law School Admissions Test and was enrolled in law school and said, ‘You know what? I really like being a cop.’ I wound up working for a local agency, getting a polygraph certificate, working at Texas DPS and having a great career there.”

He wants to continue to help serve the law enforcement community in retirement, too. Another reason O’Burke decided to return to school was to help encourage others to follow suit.

“I’m currently the president of the American Polygraph Association, and one of our challenges is to try to encourage people in law enforcement to get their degrees,” O’Burke said. “We’ve been working pretty closely with Lamar to try to further the concept of online as a way for police officers to get education and really develop themselves professionally. This is important to me personally and professionally. I said, ‘You know what? If I’m going to ask other people to do it, I guess I ought to be doing it.’”

He also recently enrolled as a member of the American Academy of Forensic Science.

“There’s a lot of movement in our profession to make law enforcement a lot more scientifically supported and evidence-based, so this is a good thing for both the profession and my career,” O’Burke said. “I’m actually enjoying it, and I don’t feel like such an old guy.”

O’Burke plans to have a couple of special guests on hand at his graduation.

Articles that appear on this website are for information purposes only. The nature of the information in all of the articles is intended to provide accurate and authoritative information in regard to the subject matter covered.

The information contained within this site has been sourced and presented with reasonable care. If there are errors, please contact us by completing the form below.

Timeliness: Note that most articles published on this website remain on the website indefinitely. Only those articles that have been published within the most recent months may be considered timely. We do not remove articles regardless of the date of publication, as many, but not all, of our earlier articles may still have important relevance to some of our visitors. Use appropriate caution in acting on the information of any article.

Submit this form, and an Enrollment Specialist will contact you to answer your questions.

to talk to a representative.

Submit the form below, and a representative will contact you to answer any questions.